These are faculty/staff announcements.

How is the Nobel Prize in Economics Selected? Ask Professor Sjostrom.

How is the Nobel Prize in Economics Selected? Ask Professor Sjostrom. 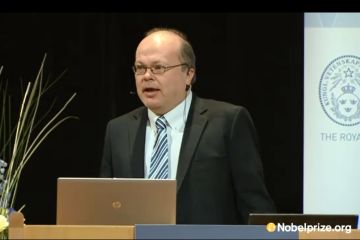 Economics Professor Sjöström is shown here speaking at the Nobel Ceremony in 2012.

Sjöström, a native of Sweden, is well-known for his work in economics game theory. He was elected to The Royal Swedish Academy of Sciences, which awards the Nobels in chemistry, physics, and economics. The prize in economics is known as the "memorial prize" because it was not one of the original categories established by Alfred Nobel in his will of 1895. Nevertheless, the prize is based on the same criteria stipulated by Nobel, who called for "prizes to those who, during the preceding year, shall have conferred the greatest benefit on mankind."

Sjöström takes it all in stride. "Of course it's all very exciting, and it's an honor to be involved," he says. "But the most important thing is that it's a celebration of science."

His colleagues in New Jersey Hall on the College Avenue Campus are impressed. They say the Nobel connection is nothing short of extraordinary.  "To actually be in this small select group that's making a decision of this magnitude is pretty special," says economics department chair Thomas J. Prusa. "There aren't many U.S. institutions that can claim to have faculty so heavily-involved in the Nobels, and we at Rutgers are very proud to have that."

He has worked for the Prize Committee since 2007. Each year he makes many trips to Sweden specifically to participate in Prize Committee and other Academy meetings. The Nobel Memorial prize is the most prestigious prize an economist can receive, and the process of selecting Laureates is rigorous and time-consuming. Indeed, since the workload is so great, the Prize Committee has recently been expanded to include a few "adjunct" members. Professor Sjostrom was initially an adjunct member, but was promoted to be one of the five full members.

Each year, the Prize Committee sends out thousands of requests, asking professors from around the world to nominate worthy candidates for the Prize. Several hundred candidates are nominated each year.  The Prize Committee screens the nominations, selects preliminary candidates, and sends these names to carefully selected experts for independent assessment. The Prize Committee then writes a comprehensive report, evaluating the work of the nominees. It sends its report, including its recommendations on the final candidates, to the members of the Royal Swedish Academy of Sciences.

In early October, the Academy makes the final decision through a majority vote, and the names of the Laureates are announced with great fanfare to the world press, which is gathered outside the meeting room. The Laureates receive their Prizes at the Nobel Prize Award Ceremony, which takes place on December 10 each year, in Stockholm.

"To recognize people who have benefited humanity, it's nice to be able to do," Sjöström said. "It's very fulfilling to follow the process through to the end. You feel pride when the prize is announced, and you're like 'wow, this is really a person who deserves the prize." 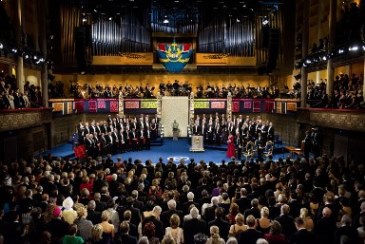 The Nobel Prize Ceremony in Stockholm draws dignitaries from around the world.

Information on the work of the Laureates is posted on the official Nobel webpage, http://www.nobelprize.org/nobel_prizes/economic-sciences/.

The statutes of the Nobel Foundation forbid disclosure of additional information (about nominations, investigations, opinions etc.) for a period of 50 years. Thus, for example, if you have questions about why Paul Krugman was selected as the 2008 Laureate, Professor Sjostrom will take your questions in 2058.

In general, this rule of confidentiality is strictly adhered to. But there are a few rare occasions where, supposedly, information has leaked out. The book "A Beautiful Mind", written by Sylvia Nasar, describes the selection of John Nash as a Laureate in 1994, including heated discussions among the members of the Academy. It is not clear how Sylvia Nasar obtained this (supposedly confidential) information, and of course, the reader cannot be sure that her information is correct. In any case, most economists would agree that with hindsight, John Nash was a very worthy Laureate. In general, the consensus in the profession seems to be that the Prize Committee does a very good job, year after year.